Note: Although you can immediately start your borneo orangutan tour upon arrival before noon, you may want to spend the night before in Pangkalan Bun to start the tour rested or to not worry about flight delays.

The best hotel in Pangkalan Bun is Grand Kecubung Hotel (link to booking.com). Especially when you are with kids or you want to rest well in a luxury hotel for a relatively low price, this is the place to be. While the best around, Grand Kecubung Hotel is less luxury than resorts in popular destinations like Bali.

Recommended hotels in the middle and budget segments are the Arsela Hotel and Hotel Bahagia, respectively.

You can visit Tanjung Puting all year round. The temperature is rather constant and while it is often raining in Kalimantan, historically the most dry period has been July-August and the most wet period has been January and February. However, in recent years the rainfall has been unpredictable, so the above should not be delt with too strictly.

Partly for the above reason, the most popular period to visit Tanjung Puting is July-August. However, we want to emphasize that besides the weather advantages of this period, there are several downsides doing the Orangutan tour in July-August:

Considering the crowds and the value for money, in our opinion the best time to visit Tanjung Puting is in the shoulder months September-October and April-June.

Most travellers however do not have much flexibility and are restricted to the high season period. As long as you manage your expecations that it will be crowded and that you return early on the last day, you will still have a wonderful experience!

The gateway to Tanjung Puting National Park is Pangkalan Bun. The most common way to get to Pangkalan Bun is by flying to the airport in Pangkalan Bun (Iskandar Airport). Currently, there are direct connections from Jakarta, Semarang, Surabaya in Java, and from Ketapang and Palangkaraya in Kalimantan. 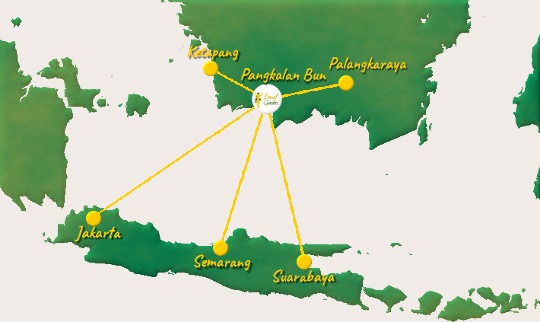 A popular destination near Pangkalan Bun is Banjarmasin. There are no direct flights currently, and the most common way to get from Banjarmasin to Pangkalan Bun is by flying via Semarang. The more adventurous option is to first take the bus to Palangkaraya (±5 hours) and then continue by air.

You could use SkyScanner to search and book both the international flights to Indonesia as well as the domestic flights to Pangkalan Bun.